Our difficulty ratings are powered by our community. Any user can grade their completed books by comparing two books at a time - either choosing one book to be more difficult or deeming both books to be about the same difficulty.

For example, if you've read both よつばと！ and ふらいんぐういっち, you'll be prompted to compare them as shown below: 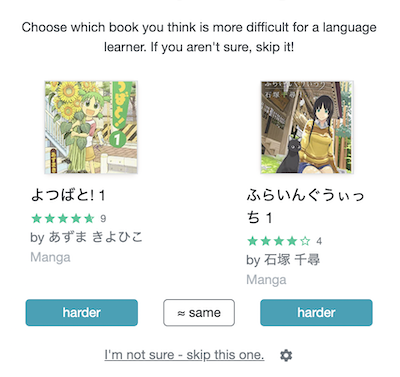 These comparisons are then put into an Elo based rating system which produces the difficulty levels you see on the site.

You can view the raw comparisons for each book in the gradings section on its associated page, such as よつばと！1.

There is no formal criteria. Rather, each user grades the difficulty as they see fit - some users will deem strange vocabulary as more difficult than complex grammar or vice versa. This hopefully averages out to a general language learner's perspective.

While we strongly recommend that you think of the levels as relative levels (a level 15 book is harder than a level 5 book), we do showcase a very approximate mapping to the JLPT proficiency levels. This is just a best guess - don't be afraid to try content deemed 'above' or 'below' your JLPT level.

The JLPT estimation is intended to denote content that's appropriate for that skill level. For example, the N3 content is targeted towards learners who have either attained the JLPT N3 certificate or who are studying for the N3 exam and want challenging reading material.

Each book is created with an initial estimated level (chosen by our team or the user who requested the resource). Until the book has been graded a few times, the difficulty level will fluctate significantly. These temporary grades are marked by '??'.

You will notice that most series have the same difficulty rating across all volumes - this is by design. In order to focus on more meaningful comparisons, we generally do not allow difficulty comparisons between volumes on the same series. However, if a series does range significantly in difficulty, please let us know and we can treat that series on a per volume basis. There are a few exceptional series where this is the case (Harry Potter, Graded Reader series... etc).

Another item to note: Even on series where the difficulty rating is the same across volumes, we still always ask you to compare a particular volume in your difficulty comparisons. This allows us to change the series to be handled on a per volume basis at a later date

In the future, we will improve this series handling so that you can compare volumes on any series if you want to, but we have other priorities right now!

Currently, we only auto generate 6 gradings per book for you. However, if there's a particular book which you would like to grade more, go to book page and see if there's an '+ grade extra' button near the grading section header. This will allow you to do more gradings on a particular book.

Unfortunately, we can't incorporate these grades into our ratings currently, as it would give particular users too much influence, but eventually we will incorporate them, so we appreciate them! They will also be displayed on the book page as well, so they still are very useful.

Some categories of books (currently only textbooks) are excluded from user gradings, with the level simply specified by our team. It's nonsensical to compare a textbook vs a manga in terms of difficulty. We do want to incorporate user gradings of textbooks at some point, but currently we do not.

And Finally - A Big Thanks To Our Graders!

Without our community grading books, this wouldn't be possible. Thank you so much! Additionally, if you have any large disagreements with a particular rating, please contact us!

About us Support us Blog
Forums Request Book Contact

As an Amazon Associate, Natively earns from qualifying purchases through any Amazon links on the site.